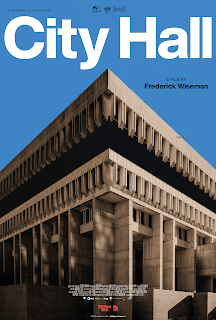 There may be no greater testament to the power of veteran documentarian Frederick Wiseman's craft than the sequence heralding the home stretch of his latest.

Arriving roughly 200 minutes into the four-and-a-half-hour behemoth that is City Hall, a quietly fascinating exploration of the inner and outer workings of Boston's city government, it finds Wiseman and his long-standing cinematographer John Davey sitting in on a polite but animated community centre discussion about the potential impacts the opening of a cannabis dispensary might have on the majority-Black neighbourhood of Dorchester.

Featuring the businessmen spearheading the venture, citizens concerned about what such a store might do to anything from the traffic situation to employment opportunities, a state rep standing in for her constituents, and city representatives outlining the city's role as a mediator, the 45-minute sequence plays out like a standalone documentary featurette. Arguments are heard, rebuttals are made, neat corporate visions are confronted with the lived experience of those to whom the business should eventually cater to. As the debate deepens, it starts touching on some of the most salient rifts in contemporary America – such as mass incarceration, income inequality, and the question whether governments, at any level, are willing and able to enact change that is commensurate with the needs of the people most affected.

It's a stunning passage, one of the most engrossing that cinema has had to offer in 2020. That Wiseman lets it – and the film that surrounds it – run to the length that they do is by no means an exercise in non-conformist affectation. Rather, the decision is wholly in service of what makes Wiseman such an essential artist of the non-fiction format, and, at almost 91, possibly better equipped to tackle the current era than many of his younger peers: more than anything, his institutional portraits – whether they are dedicated to places of art (Ballet, National Gallery), education (High School, At Berkeley), or politics (State Legislature), or to entire towns (Monrovia, Indiana) – display a profound belief in the power of extensive engagement to gain a new perspective on the everyday processes that dictate our world.


Just as there was a certain poetry in making a film about the New York Public Library at the outset of the Trump presidency, there is irony and poignancy in making a purely observational documentary like City Hall at a time where it feels like American democracy is unravelling at the seams. Indeed, it could almost seem frivolous to cast local government in as positive a light as Wiseman does here, given that, thanks to virulent disinformation, radical polarisation, rampant corruption, and a Republican Party who has fully embraced near-fascist far-right populism, trust in the efficacy and fundamental good will of government is at an historic low.

However, this is where Wiseman's approach pays dividends, for while there is precious little politics in City Hall – though Boston Mayor Marty Walsh, sort of a protagonist-by-default, offers his fair share of speechifying – there is a lot of policy, of the slow, unspectacular, but ultimately indispensable let's-schedule-a-meeting-and-talk-things-over kind. In fact, it doesn't take long for it to become obvious that the film's title, by Wiseman's standards, has to be understood more as a metaphor than a strictly programmatic scene setter.

Over the course of 274 utterly enthralling minutes, "city hall" comes to encompass the entirety of Boston's civic apparatus, which does include the usual markers of small-scale bureaucracy – citizen information hotlines, registry offices, traffic court, and other sources of day-to-day exasperation – and larger-scale government activity, most notably in the form of Walsh's frequent public-speaking engagements and meetings with selected heads and representatives of various departments.


At the same time, however, City Hall is careful to stress both the importance of an active populace to working governance as well as the small deeds that often go unnoticed in the discourses surrounding civil service, drowned out by the echoes of Ronald Reagan's withering "I'm from the government and I'm here to help" laugh line. As the film builds up to the quasi-climactic cannabis shop debate, much of its runtime is dedicated to other kinds of public outreach initiatives, which range from housing assistance to Veterans Day get-togethers, and events where practical problems are tackled with good-faith discussions about how to best apply limited resources to the broadest possible benefit – be that an anti-eviction task force deliberating on best practices to combat homelessness, or a meeting on school admissions that ends up turning on the scarcity of available accommodations.

There is something utopian about this patient and uncynical depiction of a relatively well-functioning public service undergirded by an involved polity, even as it struggles to stave off the dysfunction seeping in from Washington D.C. (Walsh, a veteran Democrat who assumed the mayoral office in 2014, references the difficulty of dealing with the current federal government several times.) In the ultimate instance of form following function – and without ever invoking the glorified myth of harmonious bipartisanship – City Hall makes the unfashionable case for spirited, meticulous, fact-based, long-form debate as perhaps the single most crucial pillar of democracy, American or otherwise. Although it may prove a difficult entry point to newcomers to Wiseman's work, due to its unwieldy length, it is an unassumingly riveting reminder that, nigh on 60 years into his filmmaking career, the man is still sharpening his craft.