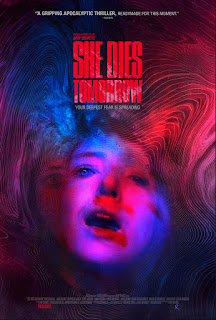 Amy (Kate Lyn Sheil) is going to die tomorrow. She's sure of it. Indeed, there is already something ghostlike about her, in how she creeps and stalks and wanders around her newly bought, dimly lit, haphazardly furnished house, as if she was looking for somebody to haunt, but can't find anyone but herself.

In fact, it's difficult to tell whether it’s the knowledge of her impending demise that has put her into this state, or whether said demise is the logical end result of that state – a state in which she finds herself unable to keep up even a simple phone conversation with her friend Jane (Jane Adams), and in which she seems at her most relaxed when she's scouring the internet for urns.

Amy Seimetz's She Dies Tomorrow is, nominally, a horror movie, but it's a horror movie that's had its insides carved out: the trappings – the sombre mood of darkened rooms, the looming paranoia caused by distorted sounds half-heard just out of earshot – are still there, but there is no monster, no spirit, no external threat whatsoever. Nothing so tangible as to warrant worries about jump scare-ready intruders slinking into Jane’s home after she, all pyjama-clad panic, runs out into the night and forgets not just to lock but even close her front door. Perhaps the most unsettling image here is the surreal sight of Kate Lyn Sheil slowly approaching the camera with an unreadable facial expression, plunged in varying shades of garish neon strobe-lighting.

The haunting, meanwhile, to the extent that there is one, is a fascinating reversal of the conceptual horror of David Robert Mitchell's It Follows (2014) or the Ring franchise: whereas those films featured supernatural harbingers of death – a shapeshifting stalker and a girl crawling out of a television, respectively – Seimetz translates the horrific metaphor back into a subconscious rumbling, so to speak. The curse with which Amy infects Jane, and with which Jane then infects her circle of friends, is just the knowledge of the simple fact of death, likened by Jane to the sensation of feeling a cold arriving the night before its symptoms start to show: I am going to die tomorrow. Whether any of the characters are right in their apocalyptic premonition is left open, as one would expect from such an intriguingly abstract, occasionally overly ponderous art film that ultimately owes far more to David Lynch, Luis Buñuel, and Quentin Dupieux than to either Mitchell or The Ring (2002).

To Seimetz, who reportedly based the mumblecore-like awkwardness of Amy and Jane’s interactions with their surroundings on her own frustrating experiences of confronting acquaintances with her bouts of anxiety, the most interesting aspects of the wandering curse are the ways in which it disintegrates established social protocol, by making people fall out of their assumed personas.

For Amy, the spectre of death becomes an ambiguous liberator of sorts, leading her to both embrace the spontaneity her erstwhile boyfriend (Kentucker Audley) couldn't satisfy and to renounce her hard-won sobriety. Jane loses the will to impress her snippy sister-in-law (Katie Aselton) with her brusque professionalism and starts to sink ever deeper into a dishevelled depression; while her brother (Chris Messina), in all of his suburban affluence, seems to have unlearned how to deal with fear and quickly unravels emotionally. One extraordinary subplot sees a couple, played by Jennifer Kim and TV on the Radio frontman Tunde Adebimpe, pick over their emotions after admitting to each other that their relationship has been dead for a long time.

Genre purists might scoff at the suggestion that She Dies Tomorrow qualifies as a horror film, precisely because it internalises rather than externalises the existential angst that haunts its characters. But in doing so, Seimetz, amid all her neon-and-drone abstraction, viscerally captures a piercing, frighteningly recognisable, maybe even primeval sense of dread about things not being as they should be.