The guiding ethos of the festival has been described by critics as one of opportunistic celebrity worship. https://t.co/DDME9nBx2T

"While it has successfully established itself within Switzerland as a celebration of film as a concept, it has yet to find its true calling as a film festival on the international stage. It is certainly too early to deem it a 'dispensable festival' – but then again, it’s never too early to start soul-searching." 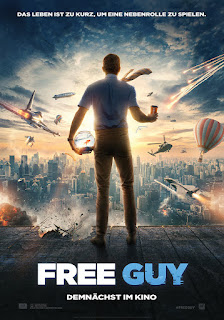 They say it's the notes you don't play that make the piece. In the case of Free Guy, Shawn Levy's emphatically middling, occasionally condescending action comedy about a video game background character taking life into his own hands, it's the notes it plays ever so briefly.

Starring Ryan Reynolds, whose on-screen shtick of playing varying shades of Deadpoolish self-awareness is starting to wear very thin, Free Guy is built around a surprisingly existential thematic core: Reynolds plays Guy, a non-playable bank teller in the virtual world of Free City, a Cyberpunk-like online game that rewards its players for committing in-game crimes and harassing NPCs like Guy in the process. But through an irregularity in the game's code, Guy suddenly finds himself disillusioned with his life as a figurative – and, unbeknownst to him, literal – non-entity and, spurred on by his infatuation with the real-life player Millie (Jodie Comer), starts playing the game himself.

"What if we don't exist?" is a question that has haunted western philosophy for at least half a millennium (and that has relatively recently been given an update in the form of "What if we live in a simulation?"), so it forming the premise of a Hollywood production with a nine-digit budget is nothing if not an intriguing proposition.

And indeed, there is a scene in Free Guy where Guy lays bare his existential angst to his best friend, chronically ineffective bank security guard Buddy (Lil Rey Howery): "If we're not real, we're not actually talking right now, ergo nothing matters," runs Guy's defeatist argument, which Buddy counters by pointing out that the very fact of the two NPCs talking to each other means that this moment is in fact real, whether they themselves are real or not.

It's quite a lovely, unexpectedly thoughtful two minutes, a quiet moment between two characters contemplating the philosophical implications of the unlikely situation they find themselves in. It's also the only scene in this 115-minute-long movie where writers Matt Lieberman (Scoob!) and Zak Penn (Ready Player One) offer any tangible engagement with their story's primary theme.

Of course, it would be folly to expect – or indeed want – a movie like Free Guy to exhaustively explore the Cartesian depths of human consciousness and its potential non-existence. But the scene in question stands in such stark contrast to the material that surrounds it, at least in thematic terms, that it doesn't seem all that frivolous to ask if Levy, Penn, and Lieberman could not have deigned to trust their audience with more than a couple of minutes of actual substance.

Again, this is not to say that Free Guy should have been a philosophical tract, or even a piece of Hollywood entertainment with the thematic weight of, say, The Truman Show (1998), one of the many films it liberally borrows visual and narrative cues from. What this is to say, however, is that this movie feels like the sobering epitome of "content," that infernally corporate term that's come to be used to denote virtually any piece of audiovisual art.

Here's a movie that's perfectly happy to be a piece of "content" – a competently assembled, dully executed remix of The Lego Movie (2014), Groundhog Day (1993), Deadpool (2016), and, yes, The Truman Show that can't seem to be bothered to bring anything even remotely noteworthy to the table, save, perhaps, for that one nod to Descartes and Spinoza. It's all slick, anonymous filmmaking, smooth, interchangeable narrative building blocks, and a mildly amusing line delivery every five minutes or so – perfectly adequate but almost aggressively forgettable.

Yet even though this film about an algorithm coming to life can often feel algorithmically generated itself, it is audacious enough to style itself as a champion of originality and individuality – juxtaposing its plucky real-world heroes, former indie game designers Millie and Keys (Stranger Things' Joe Keery), with a villainous video game mogul (a painfully unfunny Taika Waititi), who extolls the profitable virtues of endless sequels, spin-offs, and franchises. "That's what the people want!", he cackles, inviting us to scoff at his soulless vision of a popular culture that only ever gives its audience slightly repackaged versions of what they already know.

It's a nice sentiment, but one that is hard to truly take seriously from a movie that began life as a 20th Century Fox production, was finished under the auspices of the Walt Disney Company following its takeover of the former, and whose grand action climax sees Guy wielding Captain America's shield, the Hulk's fist, and Luke Skywalker's lightsaber, invoking the power of not one but both of Disney's biggest franchise cashcows.