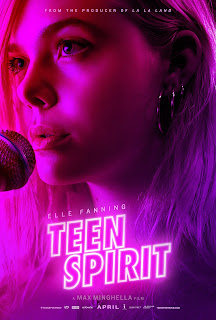 It's a tale as old as time, or at least the modern entertainment industry: a talented young person, usually a woman, gets her big break in a creative field, leaves her humble origins behind, and, with wide-eyed naiveté, ventures into the ruthless world of commercialised art. From any of the four screen iterations of A Star Is Born to Anne Sewitzky's recent Black Mirror turn Rachel, Jack and Ashely Too, stardom seems to be pop-culture's ultimate poisoned chalice.

Given the formula's continued popularity and considering its potential for both nostalgic reappropriation and subversive reappraisal, it's hardly a surprising choice of mode for a first-time writer-director like Max Minghella, the son of the late Anthony Minghella of The English Patient and The Talented Mr. Ripley fame. However, Minghella's Teen Spirit, which had its world premiere just a week after Bradley Cooper officially launched his career as a director with his take on A Star Is Born, is a strangely featureless affair that doesn't so much put a spin on its well-worn subject as reiterate all the ways in which it has been deployed before.

The talented young person in question here is Violet (Elle Fanning), the daughter of Polish immigrants to the Isle of Wight, who enters a fuzzily outlined multi-round musical talent show called "Teen Spirit" with the help of Vlad (an endearing Zlatko Burić), a washed-up Croatian opera star who now spends his days getting drunk at the local pub. But as Violet progresses through the increasingly competitive contest on the merits of her raw singing talent – and in spite of her pious mother's initial objections – a tender friendship starts to bud between her and her mentor.

If any of this sounds like somewhat ramshackle plotting, it's because it is. In what is probably an attempt to offer a more nuanced view on the established stardom narrative, Teen Spirit seems unwilling, or unable, to settle on a coherent framing of Violet's situation and ends up being frustratingly devoid of theme, ticking narrative boxes without any of the emotional pay-off that should go with it.

There are elements of a story about immigration and bridging cultural gaps here, mixed into a tale of rural authenticity clashing with the phoniness of the big city, colliding with a cautionary tale about the corrupting power of fame, which stands side by side with scenes depicting the sheer joy of following one's dream and making people happy in the process. With a truly extraordinary script and breathtakingly nimble direction, this Frankensteinian construct could be turned into a meaningful, multi-layered exploration of stardom that manages to break through all the clichés that have piled up over the decades. But this is not that script, and Minghella is not that director yet.

As is, Teen Spirit is a well-meaning but clumsy mishmash of ideas and topics, of which none are given the time and space they would have needed to make any kind of impact. Violet's identity as a British teenager of Polish origin is reduced to a few instances of code-switching and her pensively gazing at her cross necklace, while her rustic character mainly manifests itself in an aversion to makeup and a severely underwritten relationship with a pet horse.

Add to that a group of vaguely evil record label executives, the kind of jumpy dramaturgy that causes significant character development to take place off-screen in between scenes, a series of uninspiring musical numbers, whose canned and muffled soundscapes make the live performances of Cooper's equally flawed A Star Is Born seem like great cinema, and an ending that feels like the film ran out of breath on the home stretch, and you end up with something that is far more flat and generic than a movie called Teen Spirit has any right to be.