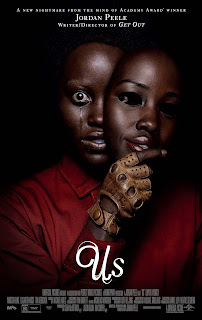 Somewhere in the first third of Us, writer-director Jordan Peele's follow-up to his Oscar-winning debut feature Get Out (2017), there is a moment of history-making brilliance. It's a mere two-word line – one that stands out so much in the moment that you could be forgiven for thinking it was a bit clunky. But it is the kind of line that feels like it will play a defining role in Peele's career – if only as an example of how, by only his second directing effort, he seems to have mastered the complex interplay between mood, story, and theme.

The line in question occurs during an especially unsettling home invasion that descends upon the film's protagonists – the vacationing Wilson family, consisting of reticent Adelaide (Lupita Nyong'o), good-humoured Gabe (Winston Duke), and their two children, Zora (Shahadi Wright Joseph) and Jason (Evan Alex). Turning in after a day at the beach – the site of a childhood trauma of Adelaide's – they make a startling discovery: there is a family standing in the driveway of their holiday home – unmoving, dressed in red jumpsuits.

Soon after, the eerie visitors have forced their way into the house, which is where Peele's supernatural horror begins: the intruders, it turns out, are the Wilsons' doubles – or rather, uncanny distortions of them. Gabe finds himself confronted with a lumbering Brute named Abraham (also played by Winston Duke), Zora with the sickle-smiled creep Umbrae (Wright Joseph), Jason with a masked feral child called Pluto (Alex). They are led by Adelaide's doppelgänger Red – a phenomenal, emotionally layered double performance from Lupita Nyong'o – whose croakily cryptic explanation for why they are here does not really shed light on the mystery, so Adelaide asks, "What are you people?" – which prompts Red to utter the best, most evocative line of Peele's career so far: "We're Americans."

If Us was more similar to its predecessor in terms of how it deploys its central metaphors, this would be a terrible line, for while Get Out is an ingenious deconstruction of American racism and predatory whiteness, its general themes, Peele's pointed social criticism, fall into place fairly neatly, which would make such a line gratingly obvious. But Us is a more puzzling film, one that allows for a broader range of possible readings, which may come at the expense of some internal coherence – it's fiendishly difficult to harmoniously square up the subtextual thrust with all the narrative twists – but which also makes this work all the richer.

"We're Americans" has to be understood in that context. The horror of the line, made all the more hair-raising by passing by without any kind of on-screen reaction or elaboration, lies in its vagueness: are Red and her scissors-wielding cohort a terrifying reminder of the dark corners of the American psyche, the country's cruel and bloody history? (Their way of asserting spatial dominance is a bizarre invocation of the 1986 "Hands Across America" campaign, which the movie seems to frame as a furtively colonial gesture.) Or do they signify the very victims of that history coming back to exact righteous revenge on those privileged Americans who routinely deem them un-American?

Ultimately, both interpretations appear equally valid, because what the film lacks in metaphorical exactness, it delivers in thematic complexity: it seems to cast the United States as a fundamentally cursed space of collective guilt, where the repressed – wilfully forgotten history as well as marginalised groups of people – comes out of the shadows and out of the past to haunt the present. In a film where nothing feels coincidental – thanks to Peele's exceptional direction and his fiercely intelligent, often wickedly funny script, whose intricate game of foreshadowing makes Us a joy to rewatch – no choice feels more deliberate than the fact that the title doubles as "U.S."

These high-concept themes are seamlessly integrated into a potent and highly entertaining horror narrative that takes its cues from Romero's Night of the Living Dead (1968), Kubrick's The Shining (1980), and Haneke's Funny Games (1997) but which works wholly on its own terms – also thanks to stellar work from DP Mike Gioulakis (It Follows) and composer Michael Abels, who help create a whole number of indelible sequences. At this point, it only seems like a matter of time before Jordan Peele is considered one of the best American filmmakers working today.