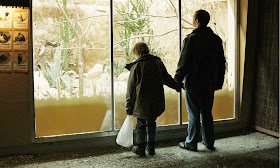 The world abounds in delicate subjects, many of which have been the inspiration for films, despite their stigma. However, there are a few that are so tabooed that even the notion of centering a film, a work of fiction no less, around them generates controversy. Austrian casting director and actor Markus Schleinzer experienced this with his first feature as a director and screenwriter. Michael is about paedophilia, its main character being the offender. This would be a risky project to actualise under any circumstances but the matter is made even more precarious by the fact that Schleinzer’s native country is only slowly recovering from the trauma of two cases concerning paedophilia. Then again, controversy and angry responses from critics are exactly what a debut filmmaker like Schleinzer needs. If you strip Michael to its bare essentials, you find a clinical, tasteful, overly distant drama about one of the most horrible crimes imaginable.