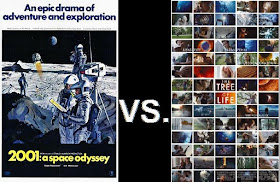 When Terrence Malick’s The Tree of Life was released earlier this year, audiences’ and critics’ reactions were varied. While some people dismissed the film as overlong, pretentious and presumptuous, others praised it as a beautiful cinematic approach to the miracle of life itself. Claims that Malick’s breaking of any real narrative structure destroyed any form of suspense were often refuted by the line “It’s just a film that’s ahead of its time. The same thing happened to Stanley Kubrick’s 2001: A Space Odyssey in 1968 – ten years later, people loved it”. Even renowned American critics Peter Travers and Roger Ebert made that connection, so it’s worth taking a look at it. Is the comparison justified or are Malick fans just trying to buy their hero’s latest opus a little time?