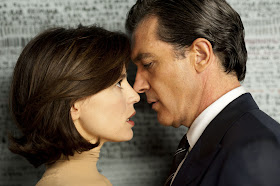 ★★★★★☆
There might be people who accuse the film of being overly artificial and contrived. It’s true that Almodóvar’s latest work is no exercise in analysing a life-and-death struggle in a callous urban setting like Alejandro González Iñárritu’s Biutiful earlier this year was; it’s not even particularly realistic. In this respect, La piel que habito will certainly split audiences: either you accept the premise and get swept away by the film’s sheer suspense, or you don’t. If you do, you will be rewarded with narrative, fictional cinema at its most enthralling. It’s a dark, sexy, and even slightly twisted film – love it or hate it. As for me, put me down under “lovers”.