Locarno Film Festival 2021: MUBI interview with Edwin ("Vengeance Is Mine, All Others Pay Cash")


At the Locarno Film Festival, my fellow Locarno Critics Academy member Anna Babos and I talked to Edwin, the director of the Golden Leopard-winning Vengeance Is Mine, All Others Pay Cash. Our conversation, which goes into Indonesian history, macho culture, and the ambivalent pleasures of cinematic violence, is now available to read on the MUBI Notebook.
Alan_Mattli um 22:30 Keine Kommentare:
Teilen

Locarno Film Festival 2021: "Vengeance Is Mine, All Others Pay Cash"


"Not only does this result in one of the most beautiful final shots in recent memory, a freeze frame that vitiates all macho posturing and allows itself to indulge in pure melancholy longing, it also offers an emphatic corrective to the one-sided gender politics this kind of genre cinema all too often espouses. As much as Vengeance Is Mine, All Others Pay Cash can feel like a magnificent throwback to the golden age of giallo and masala, make no mistake: this is bracingly modern filmmaking."

ONE FOR YOU: Locarno Film Festival 2021

In this very special episode of the One for You podcast, I join, Olivia Tjon-A-Meeuw, Mansi Tiwari, and Andri Erdin to talk about our thoughts about the 74th Locarno Film Festival: which films did we love? Which ones did we hate, and what do puppets and sleazy 1970s movies have to do with them? What's my take on the festival's big winner, the excellently titled Vengeance Is Mine, All Others Pay Cash? You can listen to the episode on Spotify or wherever you get your podcasts.
Alan_Mattli um 23:35 Keine Kommentare:
Teilen

I joined my fellow Locarno Critics Academy members Phuong Le and Caitlin Quinlan to talk to swissinfo about our thoughts on the Locarno Film Festival up to this point. You can listen to our conversation here.
Alan_Mattli um 17:04 Keine Kommentare:
Teilen


"So where do we go now from here, given that the entire industry is currently trying to deal with the economic setbacks and logistical challenges caused by the first 18 months of the COVID-19 pandemic? Although it is always risky to hazard a guess, particularly when it comes to something as fickle as art, it seems reasonable to look at the most high-profile Swiss presences at this year’s Locarno Film Festival as a a kind of bellwether for the stylistic road ahead." 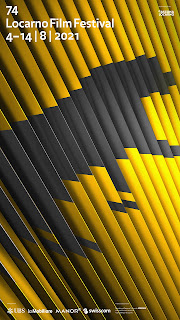 Little Solange, Axelle Ropert’s low-key coming-of-age drama about a teenage girl struggling to deal with her parents’ failing marriage, is nothing if not insistent about making you notice the sadness its premise implies.

Chronicling roughly a year in the life of 13-year-old Solange Maserati (Jade Springer), Ropert frames her protagonist’s emotional journey as a slow descent into a kind of slow-motion apocalypse: her parents, theatre actor Aurélie (Léa Drucker) and music store owner Antoine (Philippe Katerine), inexorably drift apart, argument by argument, resentful glance by resentful glance. Her older brother Romain (Grégoire Montana) retreats ever further, first into his room, then into mournful silence, eventually to university in Spain. It’s as if the safe, happy world that Solange has known all her life is disintegrating before our very eyes, treasured family rituals sour into painful grievances, idealistic childhood dreams giving way to a future that seems filled only with quarrels, pain, and environmental destruction. (In one particularly memorable scene, Solange is established as an avid Greta Thunberg fan.)

On paper, Little Solange thus has all the trappings of an affecting family drama giving insight into teenage life in emotional turmoil. In practice, however, it struggles to make this appeal any more than theoretical, starting with the very first scene – a flash-forward to Solange struggling to read a Paul Verlaine poem out loud in French class: while opening a film with a preview of a narratively or emotionally significant moment out of context is a time-honoured tradition at this point, Ropert’s use of the trope seems arbitrary to the point of laziness in its limited outlook. Even without the knowledge of what is to follow, the reasons for Solange’s tear-glazed eyes and reluctance to speak are never less than obvious, and the scene, once it returns in the linear chronology of events, neither adds to our understanding of the opening, nor does it stand out as especially decisive or impactful.
This is a symptom of a larger issue in Little Solange, which is very good at parroting the language of the dourer style of Francophone social drama (think Stéphane Brizé or the Dardenne brothers) without the quality in writing to make these gestures convincing. Ropert’s script is awash with overbearing expository dialogue of the “As you know…” variety whilst both the central characters and their conflicts remain simplified outlines. It may be true in part that this is meant to reflect Solange’s limited, naïve perspective, but her own characterisation is equally lacking in depth or compelling nuance. Right up until the syrupy epilogue, which features a long-winded monologue explaining Ropert’s thesis statement, she remains little more than a cypher, a generic stand-in for generic teenagedom. No wonder the emotions of Little Solange never get off the page.